Hot n Ready isn't just for pizza anymore.  Little Caesar's now offers wings in eight different varieties.  And they're available just as easily as walking in, forking over $5 (Now $6) and walking out. Just like their pizza.  I personally like Little Caesar's Pizza.  It's not just convenient...it's actually good.  And what a value at $5 each.   You can't beat that.  Good, Fast AND Cheap is an unbelievably rare thing in this world...particularly in food service.  The question becomes...can Caesar Wings maintain the triad set forth by the pizza????

The short answer: no.  Not at all.  The long answer goes something like this. 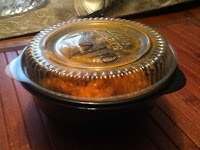 The wings at Little Caesar's are, in fact, hot and ready.  They're prepared ahead of time and kept hot right along side the pizzas in little plastic bowls with lids. When you order you'll get your choice of at least 8 different varieties.  There are eight options listed...but when I asked for "Buffalo" I was asked if I wanted that buffalo hot or regular.  So, it looks like there are two varieties of Buffalo Sauce available.  Either that, or there was a serious possibility that the girl simply had no idea what she was talking about. I opted for the "hot" buffalo. 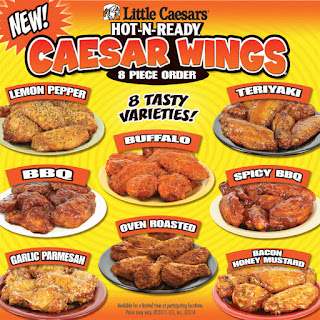 The wings are then removed from the glass heating case, your choice of sauce is added to the plastic bowl and then tossed in sauce. I also learned from my quick interaction at the counter that all of the wings start out as "Oven Roasted," one of the eight varieties.  Looks like oven roasted is a mixture of simple spices.  And that also points out another very important point.  Caesar Wings are baked...not fried.  Like so many other pizza places that add wings to the menu...Little Caesar's is baking the wings in the same oven as their pizzas.  A money saving measure for the restaurant...but not the ideal way to cook up crispy wings!

The wings were small.  The wings were soggy...but thankfully not slimy.  The "hot" buffalo sauce was not spicy at all.  The sauce was also pretty thin and runny.  It didn't cling well to the wings and puddled in the bottom of the container.

The upside is limited.  The meat was tender and juicy, there's just not much of it.  And, of course, the convenience factor.

Bottom Line:  I may try different flavors in the future.  But only because of the convenience factor.  I'm already there getting a pizza and wings are right there...hot n ready...calling to me.  But generally speaking...unless you really need a wing fix...skip the Caesar Wings. 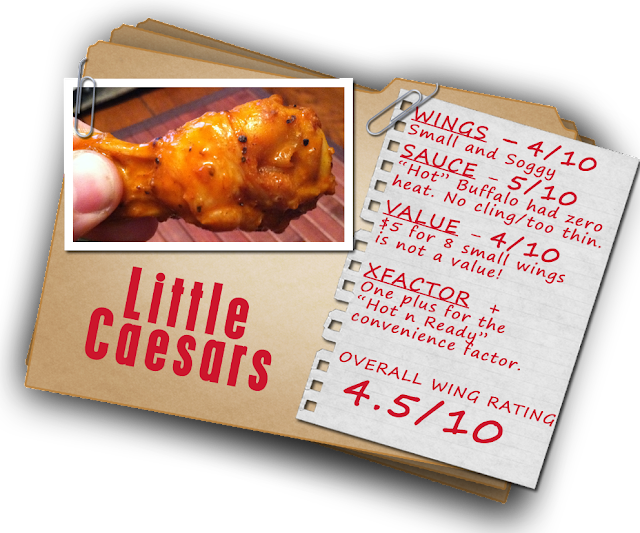