740-695-4005
165 W Main St
St. Clairsville, OH 43950
http://www.vocellipizza.com/stclairsville_oh
With a pretty good coupon burning a hole in my pocket I reluctantly decided to add an order of wings to my most recent request from Vocelli Pizza in St. Clairsville.   I say “reluctantly” because throughout my years of wing-eating, I’ve been let down again and again by take out, delivery and oven-baked wings.  I’ve discussed it before on this blog.  Takeout and delivery wings always end up a damp, soggy and lukewarm disappointment.  Plus these are oven-baked.  Sounds like a recipe for disaster.  Well, I can no longer say “always.”  Because this time I had a really good order of delivery wings. 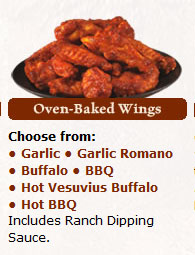 How good is it when you go into any situation with low or no expectations?  You can’t be disappointed.   That’s the story here.  Like so many other pizza places, Vocelli’s has expanded their menu to include subs, chicken tenders, and thankfully, wings.  The menu doesn’t offer much detail on the wings other than they are oven baked and it gives a list of available sauces.  It doesn’t even reveal the big secrets… how many and how much?!
Sauces are available as follows: • Garlic • Garlic Roman • Buffalo • BBQ • Hot Vesuvius Buffalo • Hot BBQ.  I, of course, tried the Hot Vesuvius Buffalo.  Cuz with only two choices in the traditional buffalo sauce category, I had to go with the hotter of the two.
The wings arrived to my front door, along with a pizza, in a very reasonable amount of time.  Maybe less than a half an hour.  Forget the pizza…I went straight for the wings.  I wanted to see how they were presented and packaged for their trip. They were in a little plastic bowl that is probably intended for delivery their pasta selections. 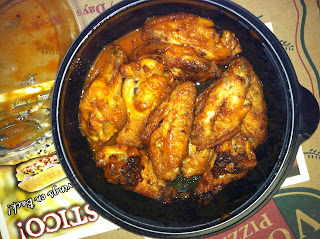 Inside I found 11 (why not just make it an even dozen?) medium to big sized wings.  The smell of Hot Vesuvius Buffalo hit me pretty hard mixed with steam.  I knew instantly that the sauce was going to deliver some true heat.  It looks like the wings get a small amount of dry seasoning sprinkled or rubbed on before baking. The sauce was quite good and quite hot.  It was another classic example of a building heat.  First wing, not so hot.  Second wing, eh.  Third wing, there it is.  About halfway through the order my eyes were watering and my lips were burning.  And like any good bite, it didn't bite too long. Within a few minutes my body's response system had return to normal!
Now here’s the surprise.  Every wing had a crispy edge.  Not all over crispy like a deep fried wing.  But a nice darker edge that gave each wing a certain amount of crispiness.  Some of them had little spots of black char that tasted really good too.  I think that dry seasoning helped crisp things up.   Definitely no slimy skin or fear of under baked chicken here.  These wings were hot, meaty and juicy with just a little crispiness.  It must be an awfully hot oven!
Unfortunately, I can’t really speak to the value of the wings.  Truth is I have no clue how much they cost!  The online menu doesn’t say and I forgot to ask.  I suppose I could call just to ask….but…whatever.  The wings were good and around here that’s what counts!  I don’t recall any ranch dipping sauce being included as the menu says.
BOTTOM LINE?  These were really, really good wings especially when you consider that they were A) from a pizza place B) “oven baked” and C) delivered to my house sealed in a plastic Tupperware-like bowl.  Even aside from all those stipulations, they’re still damn good wings.  If you are anywhere near a Vocelli’s Pizza and you’re looking to satisfy the craving without going out or without having to fry your own batch then I can highly recommend these wings.  At the very least, add an order to next pizza order.  If they are anything like the wings I had with my order then I’m sure you’ll like ‘em too.

UPDATE:  THIS VOCELLI'S LOCATION IS CLOSED AS OF FEBRUARY 2012. 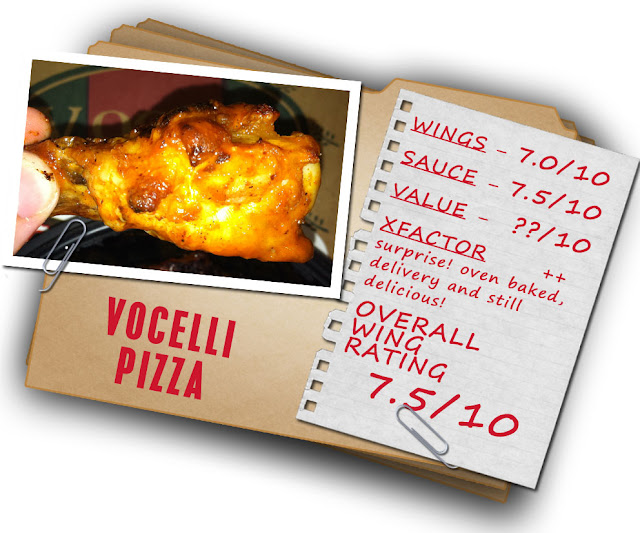