180 E Waterfront Dr
Homestead, PA 15120
(412) 685-4626
If there was ever a place where the food and menu was secondary to a different, all-together separate attraction…that place has to be Dave & Buster’s.  Commonly known as “the adult version of Chuck E. Cheese’s,” Dave & Buster’s boasts a lot of fun under one roof.  There’s a lot going on at Dave & Busters, unfortunately, the food aspect of things lacks the flash and excitement of the arcade side.
“But isn’t it just glorified bar food?” one might say.  “With a line-up of deep-fried-favorites, what do you expect?”
You’re right. There are lots of appetizers masquerading as entrées… and vice versa.  The menu is mostly like a Friday’s or an Applebee’s.  Trouble is, the prices are too high, the portions are too small, and frankly, it seems like no one in the kitchen at Dave & Buster’s cares all that much.  That attitude shows in the lackluster food.  Wings included.

So, that all sounded pretty harsh, didn’t it?  The wings weren’t that bad.  They were ultimately a middle of the road entry.  Nothing bad, but nothing to write home about either.  I wouldn’t even bother emailing home about them.  (apologies if I’ve already used that joke on this blog before…I can’t remember)

Here’s what you get.  You get your choice of bone-in or boneless with either “Original” or “Firehouse” sauce.  And your choice of ranch or bleu cheese for dipping.  Of course, I got bone-in wings with Firehouse sauce.  And the waitress brought ranch even though I told her I didn’t need it.   I appreciate that they’re rolling with two levels of heat and nothing more in the sauce selection.  Typically, if you run into only two sauces…they’ll be split between buffalo and BBQ style sauces.  Too bad if you like BBQ…but as an (almost) strictly buffalo wing eater…I like the choices even as limited as they are. 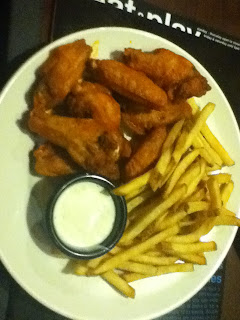 The menu boasts that the wings will be jumbo.  They are not.  They’re not so small that they’re disappointing… but they’re medium to large(ish) at best.  The menu also proclaims that they will be “hot and crispy.” In these departments, they delivered.  Again…not overwhelmingly.
The value is pretty low here too.  As I said earlier, too much money in exchange for not enough food.  $8.99 for 8 (not) jumbo wings.  The best value comes in adding a side of seasoned fries for only 89 cents or the ever popular sweet potato fries 99 cents.  I added seasoned fries and they were actually quiet good.
The night we were there, the kitchen was incredibly backed up.  Our waitress apologized multiple times.  But we’re a pretty patient and understanding group and would never take that out on a waitress.  She did a fair job for as busy as she was and she remained friendly and positive no matter what.
Bottom Line:  These wings are a halfhearted mid-grade entry.  They’re  inoffensive yet unremarkable.  Everything seems to be done right.  You get a traditional, deep-fried, bone-in wing -with no breading or batter- tossed in buffalo sauce.  Sounds perfect, right?  But they’re missing that push to make ‘em good.  They’re missing something.  Oh yeah.  Maybe a kitchen that cares.  Drink the beer and play the games.  Have fun and save your money; eat wings somewhere else! 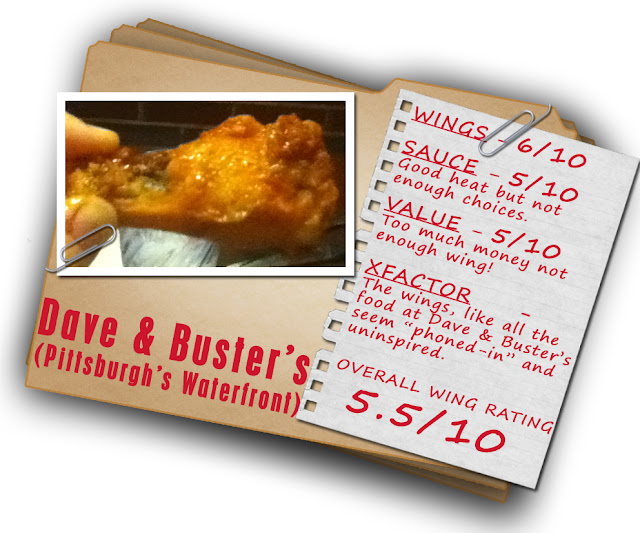 Email ThisBlogThis!Share to TwitterShare to FacebookShare to Pinterest
Labels: beyond the ohio valley, Dave and Buster's, family dining, lunchtime, national franchise, Pittsburgh, wings are not the main thing, with a bar