51130 National Road
St. Clairsville, OH 43950
740-695-8888
It’s hard to write a review when you don’t have a strong opinion of the product.  My eyebrows didn’t raise with surprise or delight.  Nor did they furrow in disappointment.  The wings from The Sports Bar – Undos West don’t seem to illicit a passionate response from me in either direction.
Hard to say why.  Because the fact is The Sports Bar has a fairly unique product on their hands. 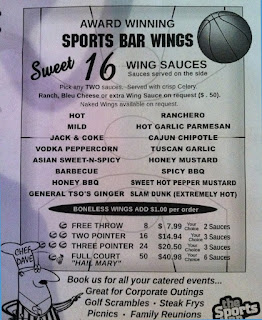 I’ll start with the value on this one.  It’s pretty low if you’re just ordering right off the menu during non-special hours or non-buffet hours.  $7.99 for 8 wings!  Not a good deal at all.  Of course, the value increases as you place larger orders.  And one cool thing is the more you order…the more sauces you get to choose from.   With an order of 8 wings you can choose two from a lineup of 16 sauces.  So that, at least is pretty cool.
And again they have a pretty unique selection of sauces.  Only three though in traditional buffalo levels of heat.  I chose “Slam Dunk” which boasts  extreme heat on the menu and “General Tso’s Ginger.”  Cliock the menu pic for more details and a full list.  More unique is the fact the sauces are all served on the side in plastic, throwaway ramekins.    That’s no surprise though as it states this plainly on the menu.  And I’m pretty sure if you really, really wanted the wings tossed in the sauce that would be happy to do so.  Just ask nicely!  I have to question the reasoning behind serving sauces on the side.  Is it for the customer’s benefit?  Or to make things just one step easier on the cooks? BTW...Slam Dunk was NOT extremely hot.  It was hardly hot at all.
Well, the Unique-o-meter is up to 4 or 5 now.  Here we go again…the wings themselves seem to be battered.  Yeah, that’s right.  Lightly battered.  They are crispy…the way a funnel cake or elephant ear is crispy.  But I dunno what to tell ya.  The batter is super bland.  There doesn’t seem to be any particular herbs or spices…or FLAVOR to the batter.  So, what’s the point???
The menu states “naked” wings available.  And seeing as how they are already served without a coating of sauce…I’m willing to bet that “naked” means….no batter.  I’ll ask and try next time.
I think someone was coming up with ideas to innovate the way wings are usually served.  Unfortunately, it doesn’t do much for me.  Maybe it sounds just right to you.  Does it?  I question the reason for the battering especially since it offers no added flavor or crispiness.  I don’t really like the sauces served on the side.  I want my wings tossed.  And to top it all off the cups of sauce seemed to have come right from the refrigerator! They were still chilly!!  C’mon man! 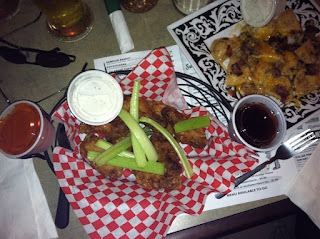 The menu is a treasure trove of bar food and delicious treats from the fryer.  The wings are featured pretty prominently.  As a side…we had the perogies.  They were really good tasting and really bad for our waistline, me thinks!  You can glimpse the perogies in one of my photos. Covered in butter, onions, tons of cheese and bacon!
Bottom line?  There’s nothing terribly offensive about these wings.  But they’re not worth writing home about either.    They’re not great or terrible.  They simply exist.   And they’ll do in a pinch.  If you’re hanging at The Sports Bar @ Undos West…and you’ve got the craving…then, yes…get em!  Just don’t go out of your way specifically for the wings. 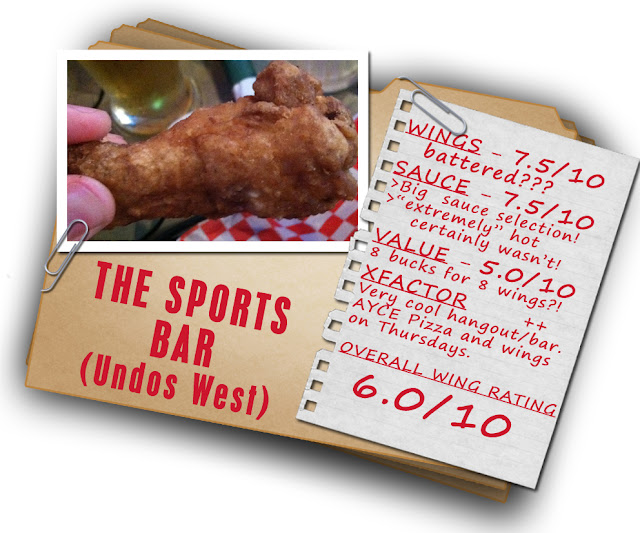 Email ThisBlogThis!Share to TwitterShare to FacebookShare to Pinterest
Labels: lunchtime, mom and pop, ohio valley, sports themed, The Sports Bar, wings are not the main thing, with a bar