Saint Clairsville
50655 Valley Frontage Rd
(740) 695-8440
Applebee’s is a default kind of place.  You know what you like, and you know exactly what to expect.   You’ve probably got a few favorites on the menu that you get each time, rarely straying off the path.  That’s the good thing…and the bad thing…about Applebee’s.  And what may be worse…you don’t really expect much from Applebee’s.  Well…if you’re thinking about mixing up the same old routine with an appetizer or two…or if you’re just stopping in for some beers and a bite…I think you’ll be surprised by the wings.
Like so many other national chain, casual dining restaurants, the wings are just hanging out in the appetizer section of the menu with their proverbial pals: the spinach-artichoke dip, mozzarella sticks and of course the unexplainably popular boneless “wings”.  So when you order, make sure you specify that you want bone-in AKA “classic” wings.
You’ll see a pretty limited selection of sauces apparently ranked by degrees of spiciness as indicated by a colored dot alongside the sauce name.  Only 5 sauces to choose from…but when you really start to pay attention to other chains like Applebee’s …you’ll see that 5 sauces is better than the 2 or 3 that other similar places might offer.
For even the smallest of spicy cravings to be satisfied, you need to go with the Hot Buffalo.  I’m pretty certain that the Classic Buffalo would be equivalent to a “mild” sauce on any other menu.   And yet…I think it’s likely that the Hot Buffalo is just the Classic Buffalo with some dry spices sprinkled over the wings after they’ve been tossed in sauce and put on the platter.  Maybe you can see the dry spices in the photos.  Either way the Hot Buffalo has a really good flavor and will leave a little tingle on your lips when you’re done.
These are definitely traditional wings…deep fried and tossed in sauce.  The wings came out crispy.  Exactly how we like ‘em.  There was something weird going on with the drums.  While the flappers were all crispy outside and still moist and juicy inside…the drums were crispy but too dry on the inside.  Not enough to make them uneatable or even unappetizing... just noticeably dry.
For the most part, both the drums and the flappers are medium sized wings.  I did have one anomalous large drum on my plate.  Nothing, though, that could be considered jumbo.
On to value.  The value here isn’t so great.  At $8.49 for an order of ten…that’s 85 cents for each one.  While the flavor is really good, and the crispiness is right on, the size of these wings is main drawback.  Based on size, the value factor takes a big tumble.  On the positive side the celery is built in to the price and so is your choice of ranch or bleu cheese for dipping.  Lots of places up charge 50 cents or so for those “extras” but that’s not the case at Applebee’s.  Doesn’t mean much to me though, as I don’t eat the celery and I never get use the dips.  I’d rather taste delicious, spicy, saucy wings…not celery.
Bottom Line:  The wings at Applebee’s are always surprisingly good.  While there’s not a lot of unique character in the recipe, at least they’re fried crispy and coated well in a traditional buffalo sauce that brings enough spice to satisfy the craving.  So, if you find yourself at your Applebee’s and you’re in the mood for some wings…go ahead and put your order in.  I don’t think you’ll be disappointed…in fact, you’re probably going to be surprisingly satisfied. 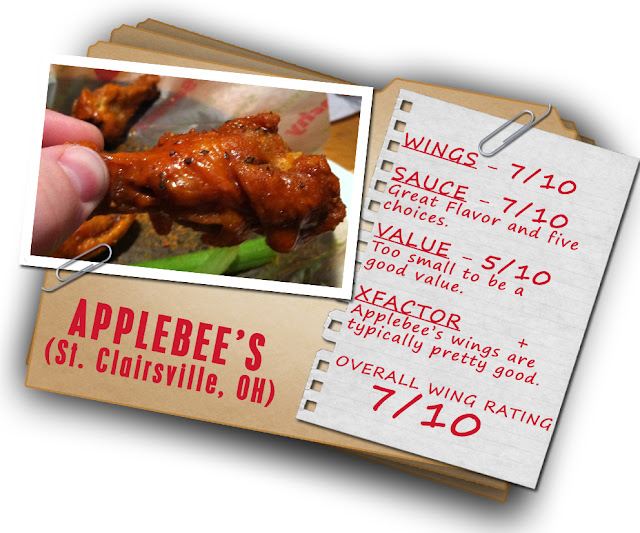 Email ThisBlogThis!Share to TwitterShare to FacebookShare to Pinterest
Labels: Applebees, beyond the ohio valley, family dining, lunchtime, national franchise, ohio valley, wings are not the main thing, with a bar