Is Buffalo Wild Wings the largest national wing franchise?  I’m not sure.  A quick google search yielded a lot of info on franchises…but nothing that answered my question.  It doesn’t matter anyway.  The point is that Buffalo Wild Wings seems to be the largest national wing franchise.  They are constantly expanding, building new restaurants, and their publicly traded stock has gone through the roof in the last year.  If you spend even just a little bit of time online reading about hot, chicken, or buffalo wings…you eventually arrive at someone raving and recommending Buffalo Wild Wings.  You’ll also see stories about people who don’t live near one wishing that they did.  And you’ll hear tales of people road-tripping far from home just to try Buffalo Wild Wings.  Well, I've finally got around to reviewing the big wing chain that's practically in my backyard.
But I’m biased.  Here in the Ohio Valley we’ve had Buffalo Wild Wings nearby for more than 10 years!  And even though I haven’t had their wings in quite a long time…I’d estimate that they still are the wings I’ve had the most.  In college…late 90s/early 2000s…we were there each and every single Tuesday night for wing night.  Back then they were 25 cents each! Then, following college, we were there each and every Friday night to kick off our drinking for the weekend.
So you see…these wings are old news to me.  They’re not new.  They’re not flashy.  I have not fallen victim to the massive advertising campaign that’s been sweeping commercial breaks during sporting events for the last few years.  I know them.  They know me.
Although I’m not a professional writer, reviewer or eater…I do think that I can act professionally and put my biases aside for the sake of a good review.  (From here on, “Buffalo Wild Wings” will be referred to as BW3s…cuz I’m tired of writing it out.  More on the abbreviation to come.)
So, we headed to BW3s on a Tuesday night.  Wing Night!  They used to be 25 cents.  Then 30. The very quickly 35, 40 and 45 cents.  That’s where they stand today.  But that’s not really a fault of BW3s…they’re pretty much in line with other wing night prices.
One nice thing is that the waitress will bring you as many wings as you want…at the same time.  (Other all-you-can-eat wing nights will limit how many wings you can order one time…think unlimited shrimp at a seafood place)  You must order a minimum of 5 wings.  Again, no problem.  Who in the hell would want one, two, three, or four wings anyway?  With that in mind, I ordered 5 Hot, 5 Wild, and 5 Parmesan Garlic.  15 wings for less than 7 bucks.  Lookin’ good so far.
When the wings arrived they were absolutely, straight-out-of-the fryer, steaming hot.  They looked good and smelled even better.  Each flavor was served separately in its own paper boat.  And each flavor had just the right amount of sauce coating each wing.  BW3s sauces are typically thick and creamy.  They really stick the wings.  Each sauce has its own unique flavor. The Parmesan Garlic was extra creamy and full of flavor.  It’s my favorite non-buffalo style sauce.  Even Hot and Wild represent very distinct steps on the Scoville Scale.  And that’s something that I really appreciate.
I like places that have many options available in levels of heat for traditional buffalo style sauces.  Hot here is a true hot.  It brings heat and flavor and might be too much for most people.  There’s a mild and medium available for those buffalo seekers who don’t want to sweat.  The next step up in buffalo style sauces is the Wild sauce.  And it really warms you up.  Your eyes might water and your cheeks might sweat a little bit…but Wild remains tasty and is never a burden or an unwelcome challenge.  For the brave, (only once for me) there’s the Blazin’ sauce.  And the Blazin’ challenge exists for bragging rights if you’re into punishing yourself for no good reason.
The size of each wing, drums and flappers, were all very large.  No complaints there!
There’s a lot of upside here and only one real drawback tonight.  Just as I remember from my many, many years spent gnashing wings at BW3s, the wings completely lose their crispiness after a short time.  They started out hot and crispy…but I’m not a beast and I like to actually enjoy myself as I eat…so it takes more than a few minutes to eat 15 wings.  By the end, they’ve gotten a little soggy.  It’s a drawback…but not a deal breaker.  The wings were meaty and not fatty…which was a saving grace once the crispiness was gone.
BOTTOM LINE:  Very, very good.  The big chain got it right!  The wings at BW3s were soooo much better than I remember.  I stopped getting them years ago because they got smaller, more expensive and the overall quality had dropped.  That was 100% not the case tonight.  Tonight, I had large, meaty, hot, (mostly) crispy delicious wings.  Let’s hope tonight’s successful wing night represents the same tasty experience you’ll have at BW3s.
NOTE:  Buffalo Wild Wings used to be called “Buffalo Wild Wings and Weck”.  That’s where the third “W” comes from in the abbreviation “BW3s.”  I guess, maybe, I’ll always call it that.  And you’ll find lots of others still calling ‘em BW3s.  In addition, I call ‘em “B-dubs” when vocalizing it.   I also see lots of people online calling it “BWW” 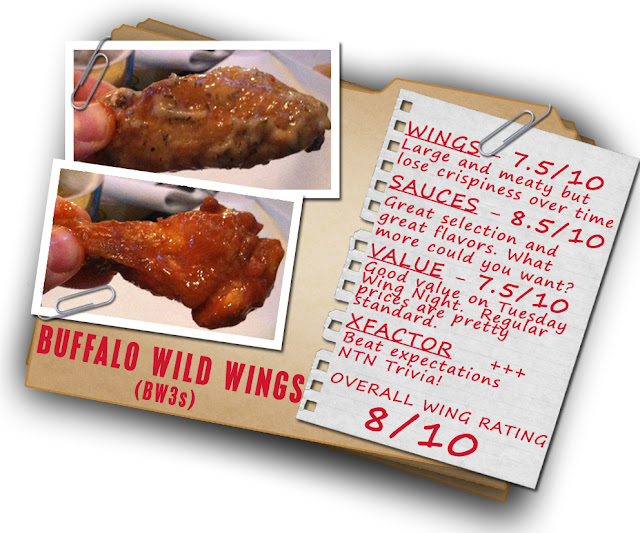