67800 Mall Road
St. Clairsville, OH 43950
(740) 699-4778
Garfield’s is the kinda place that’s not on the top of anybody’s list.  Good lists. Bad lists.  They just don’t seem to be on anyone’s radar.  Grabbing a meal at Garfield’s is usually more influenced by convenience than true craving.  Located inside the Ohio Valley Mall, Garfield’s anchors the wannabe-food court at the main entrance, along with Osaka Japanese Steakhouse and Fabio’s Pizza.  They’re not known for wings.  …or steaks …or burgers …er, wait a minute…they’re not really “known” for anything in particular. Are they?   But to be honest (and why wouldn’t I be?) I really enjoy the food every time I eat there.  Come to think of it, they used to have a kinda Mexican influence.  American food punctuated with enchiladas and quesadillas was the “thing”. Yeah, that’s it.  Well, that “thing” is gone as of my most recent visit.  Seems like an Applebees clone.  There is nothing particularly standout-ish about Garfield’s now…except a very surprising and pretty good order of wings.

Like so many other chains, the wings here are hiding in the appetizer section.  No photos. No features.  They don’t even have a fancy trademarked name.  Nope…just “Chicken Wings" "Traditional chicken wings lightly fried and coated in your choice of sauce.” $7.99
It may be your choice of sauce, but the choices are quite limited.  They only have three options: 1) Traditional – extra hot & spicy.   2) Honey BBQ – sweet & tangy.  And 3) Tiger – sweet & spicy citrus.
The menu doesn’t say how many wings or a measurement in weight so I was expecting and order of maybe 8 wings…10 tops.
Also, it doesn’t say if celery, bleu cheese or ranch is included, so I was expecting nothing. 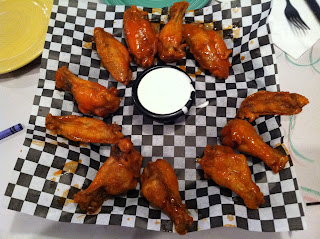 Well, surprise, 12 wings, served with plenty of bleu cheese, extra plates for the bones and a traditional buffalo sauce that looked and smelled really tasty!  Not that wings arranged in a circle qualifies as superior culinary presentation…but hey, it looked nice too.
The wings were all big, except for one that might qualify as puny.  They were lightly crispy, pretty juicy and served quite hot.  They were coated well with a perfect amount of great looking orange-red buffalo sauce.  No section of any one wing was spared but they weren’t swimming in a lake of sauce either.  Somebody in that kitchen knows how to toss a batch of wings.
The sauce wasn’t “extra” hot as it was billed on the menu.  I doubted that it would be.  But it did have a reasonable amount of heat. Maybe it would be “extra hot” to someone with a little less tolerance for heat.  Much more than mild…this comes in somewhere what I would call the medium end of hot.  The sauce coated well and had a good buffalo flavor.
Bottom line?   I’m not gonna tell you to rush out and try these wings.  Cuz let’s face it, with Garfield’s it’s still a matter of convenience over craving.  If you’re in or around the Ohio Valley Mall area and you crave some good wings then Garfield’s is a convenient choice.  Give ‘em a chance and I think you’ll be satisfied. I know I was.  Next time I’ll try the Tiger flavored sauce just out of curiosity.
UPDATE: As of February 2012...Traditional, bone-in, wings are no longer available at Garfield's.  It's a shame.  They were good.  And doubly-shameful, because boneless wings remain on the menu.  File under "ridiculous." 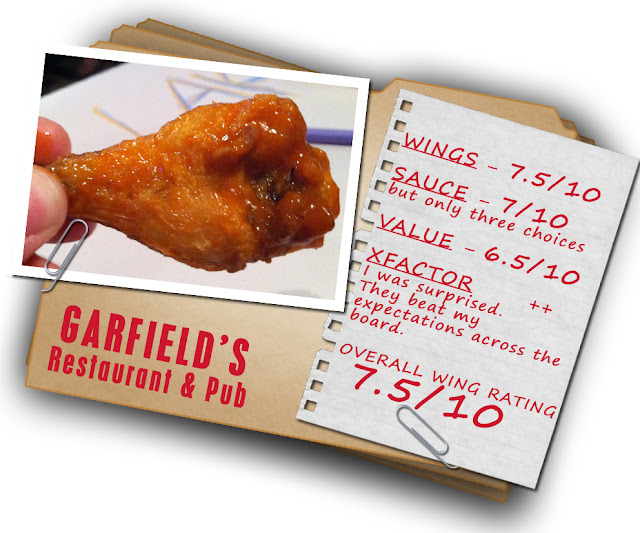 Email ThisBlogThis!Share to TwitterShare to FacebookShare to Pinterest
Labels: family dining, Garfield's Restaurant and Pub, lunchtime, national franchise, ohio valley, wings are not the main thing, with a bar