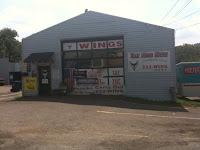 "The Place for Wings"

Let me just admit it right from the start. I’ve probably had 19th Hole’s wings more than any other wings around Wheeling. And there’s a reason for that….I love ‘em. I like the wings, the beer, the bartenders, the dirty checkerboard floor, the golf scorecard-style fairway boundaries painted on the drop panel ceiling, and meeting my buddies for drinks and conversation. I like everything about this place. It’s a hole in the wall but not quite a dive. At least, it’s not a dive in this town. I’m sure some big-city sophisticates out there would wonder just what they’ve gotten themselves in to. It ain’t pretty. But that’s just how I like it. There’s a mild golf theme to the decorations around the place, but for the most part the stuff hanging on the wall is standard sports bar swag. Pens, Steelers, Pirates, WVU and tons of flat screen tvs…it’s all here.
As I said, I’ve wolfed down these wings quite a bit over the years. But now it’s time for an official review.
Like most places the wings come by the pound. How close is it to an actual pound? Who knows. Cuz again, like most places the pound is an estimate. Here you get 8 wings per pound served in a basket.
Sauce selection at the 19th Hole is one the best around. They offer up five levels of heat for traditional Buffalo style sauces. Mild, Medium, Hot, Hole n One, and Chernobyl. And around a dozen more choices for folks looking for some unique flavors. An incomplete list includes names like, Golden Garlic, Spicy BBQ, Honey BBQ, Lemon Pepper and Ranch. (A creamy mixture of ranch dressing and medium sauce…mmm…very smooth). Also a few new additions to the sauce line up include Teriyaki and General Tso’s. (Which is also fantastic, btw). 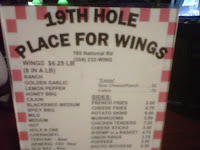 For this visit…like almost always…I opted for the second to hottest, “Hole n One.” (Which oddly is the only sauce titled in line with a golf theme.) This is probably my favorite sauce of all sauces. Not too thick. Not too runny. And applied in perfect proportions. Flavor is not sacrificed for heat. Both are allowed to run wild here. It’s my favorite, though, because it brings the perfect amount of heat for my palate. Even the steam that rolls off is spicy enough to burn your nose and clear your throat. Keep in mind that I’m not interested in eating the hottest sauce around just because I can get a free t-shirt and my picture on a wall. What’s the point if there’s no flavor or if you’re not even enjoying the wings? My Hole n One had a building heat that plateaued about halfway through my order of 8. But also a lasting heat that I never quite got used to throughout my order. There’s a tingle on my tongue and lips. A few beads of sweat on my cheeks. And a few tears in my eyes. But it’s always manageable with sip of beer…or if you prefer…a dip of bleu. It’s right on the edge of being too hot for me. And I think that’s why it’s my favorite. If you like things a notch or two (or three) hotter than most people prefer, but don’t like punishing yourself for no reason…then this may end up being your favorite sauce too.
I’m pretty sure that 19th Hole has the crispiest wings around. Authentically prepared, deep-fried to perfection and still juicy on the inside. If Drover’s Inn didn’t exist, the 19th Hole might also have the largest wings around too. Side by side though, Drover’s Inn has the 19th Hole beat when it comes to size and meatiness.
$6.25 for 8 wings sounds a little steep and ranch, bleu cheese and celery are all 50 cents extra...each. But, I’ve said it before, when everything is done so well, no one is really concerned about the cost. 19th Hole does have two different “wing night” specials. Tuesdays from 5pm til 10pm you can get 2 lbs of wings for 10 bucks. And Mondays, wings are 45 cents each.
As a side, nothing compares to the cheese fries with bacon. The 19th Hole has basically revolutionized what can be done with (a ton of) shredded cheese and plain old crinkle cut (ore-ida?) fries. The cheese fries are a MUST.
Bottom line? My mouth is watering as I write this review. I was just there and I already can’t wait to get back! So what’s that tell ya?  These are some of the absolute best wings in the Ohio Valley.
WINGS – 8.5/10
SAUCE – 9.5/10
VALUE – 8.5/10
XFACTOR++ (historically my favorite sauce, cheese fries, a melting pot bar)
OVERALL WING RATING – 9/10

Email ThisBlogThis!Share to TwitterShare to FacebookShare to Pinterest
Labels: 19th Hole, mom and pop, ohio valley, wings are the main thing, with a bar